12 months old MILAN z Czarnego Dworu, the only one representative of our kennel, got excellent and took 4th place among 11 participating dogs in junior class. We are happy with his performance, we heard a lot of nice words about him from another breeders coming from many countries.

This time there was no victory, although we are glad that dogs from our kennel still have influence on breeding of German shorthaired pointers all over the world. To give an example of it, offspring of OBELIX, DON and SZAFIR won or were on leading places in several classes. Apart from that the daughter of SZAFIR z Czarnego Dworu – Malomkozi GILDE became World Winner among females. Congratulations! 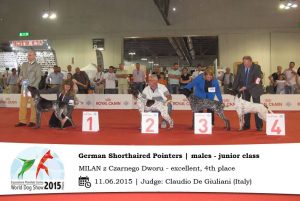