I would like to thank the owners of the dogs from Z Czarnego Dworu kennel for participation and great handling of dogs at these events.

Congratulations to the dogs and their owners, who won the title of World Winners 2021: Avaline TALISMAN oraz SELENE Moon Eyes.

All shown dogs during Special Dog Show are out of the following parents: WW, EW, WJW Avaline TALISMAN and vice-WW UTOPIA z Czarnego Dworu. UTOPIA won the German Shorthaired Pointer Club Show at the World Dog Show in Brussels, now her daughter has repeated her success in Brno. FENDI competed against 55 females in total… Congratulations, especially to her owners and Ewelina who handled her wonderfully in the ring! 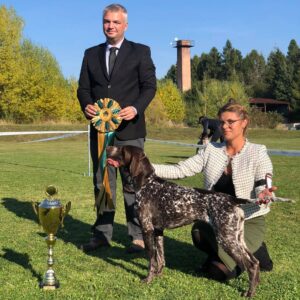